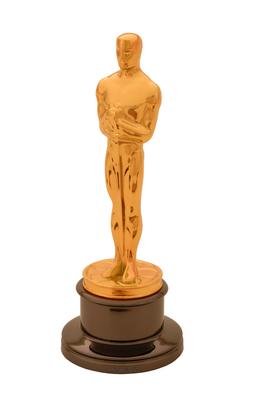 Somewhere in one of my parents’ homes, buried deep in a pile of old relics, there’s a photograph of my mother and father, circa 1972, my dad looking awfully dapper in a tuxedo and my mom donning an elegant low-cut black dress with a string of pearls, sitting at a dinner table at the Emmy Awards.  Perhaps for obvious reasons, it’s an image that always comes to mind when Oscar night approaches.  Back in those days, when my dad was a network executive, attending award shows was just a part of his job.  Not exactly a required part, mind you, but more like something you got to do if you wanted to… not a bad perk, from where I’m sitting.

The Emmys and, even more so, the Oscars, were pretty much national holidays in my house.  We were a quintessential movie-loving family, growing up in LA with a dad who worked in the industry.  But even if my dad had been a pilot or a dentist or a mad scientist, it probably would have been the same story. From the time they were both kids, my parents always loved the movies, and they passed their love of film on to my brother and me.  What’s more, we lived in an industry town, so everyone we knew seemed to have some attachment, whether financial or emotional (or both), to film.

Among my most treasured childhood memories are seeing my first PG-rated flick, “The Heartbreak Kid” – how cute was Charles Grodin back then? – and the thrill of seeing my first R-rated film, “Three Days of the Condor” (I know my mother still swoons for Robert Redford).

Around the same time as I was “coming of age” in movie ratings parlance, Dad moved from television into the film industry, and became a member of the Executive Branch of the Academy of Motion Picture Arts & Sciences, best known for handing out the Oscar Awards.   That’s when Mom and Dad started going to the Oscars.  Woah.  What a thrill it was to watch the show from our living room with my brother and our grandmother, peering closely whenever the camera panned the audience to see if we could spot our folks (of course, we never did).  Though I can’t explain why, it all felt very important and, in a way, very personal.

After a few years, the glossy sheen of attending the Oscars wore off for my parents – they tired of the Monday afternoon gridlock driving downtown (remember when the Oscars were on Mondays in April, not Sundays in February?), the huge line up to park at the Dorothy Chandler Pavilion, then driving back across town for the Governors Ball  at the Beverly Hilton and parking again… it was just a hassle,  they said, and they stopped going.

After a few years’ hiatus, when I was in my mid-teens, my dad (correctly) thought it would be fun to take his kids with him, so lucky us, we each got a turn to be his date on Oscar night.  I was in the audience the year that “Kramer vs. Kramer” beat out “All That Jazz,” “Apocalypse Now,” “Breaking Away,” and “Norma Rae” – and of course, we had seen all of those films — didn’t it seem like there were SO many great movies back then?

Two years later, the year he was planning to take my brother, Dad scored  an extra pair of tickets because the film his company had produced, “On Golden Pond,” had a schwack of nominations (it lost Best Picture to “Chariots of Fire,” but Katherine Hepburn and Henry Fonda both won the Best Actor awards… very exciting).  The catch was, Dad only found out a couple days before the show that he had two extra tickets and told me I could come and bring a friend.  So I asked the only guy I knew who owned a tux, my high school pal Dave Koz, who as a young musician was playing at a lot of weddings and bar mitzvahs at the time. Needless to say, Dave and I had a ball walking down the Red Carpet and meeting tons of celebrities at the Governers Ball afterwards.  While we still had to schlep downtown and then back to Beverly Hills for the dinner, we didn’t mind one bit… it was definitely a night to remember.

Now, less than two hours away from the start of the 84th Academy Awards, my heart is already beating faster.  I can’t wait for Billy Crystal’s opening bit, and I know I’ll cry at someone’s acceptance speech, and maybe too when they show all the people who’ve died this year.  It’s not so much the fancy dresses (if you know me, you won’t be surprised to learn that I could care less what people are wearing)… rather, it’s the acknowledgment that the movies DO mean something to those of us who watch them, that they are a wondrous, magical way to transport ourselves into other worlds, that they are our fantasies, our stories, our entertainment, and sometimes even, our inspiration.

5 thoughts on “Oscar Night: It’s the Most Wonderful Time of the Year”