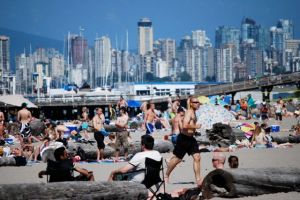 On the morning of December 27, 2007, I pulled out of the driveway of my home in sunny Los Angeles, merged onto the San Diego Freeway heading north, and four days later (having taken my time visiting friends and relatives along the way), crossed the border into Canada to begin a new life.  I had flown up a few weeks earlier and signed a lease on an apartment, but my furniture hadn’t arrived yet, so I was staying at my friends’ house. They were out of town for the holidays, so my New Years Eve celebration that night was quiet.

The next morning, on my own for the first day in my new town, I headed to Jericho Beach, to the very place where I had decided a few years earlier that I wanted to make Vancouver home.  Here’s what I saw that day:

Here I am, I thought.  Kind of amazing how it all turned out.  I felt a sense of great happiness and renewal, and knew that I was exactly where I was supposed to be.

The year passed, and it snowed over the 2008 Christmas holiday.  The city all but shut down — snow in Vancouver is a rarity — and I’d hibernated for a week with a bad cold, so by the time New Years Day 2009 came around, I was ready to get outside.  I don’t drive much in the snow (LA girl, go figure), so I took the 99-B Line down Broadway to Alma and walked over to Jericho Beach.   Here’s what I saw that day: 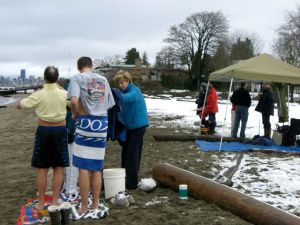 Mostly, though, people were walking along the path with their dogs as if it were any other day at Jericho Beach. 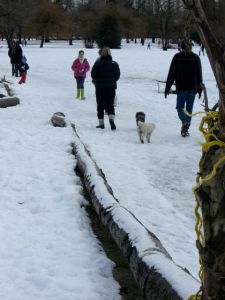 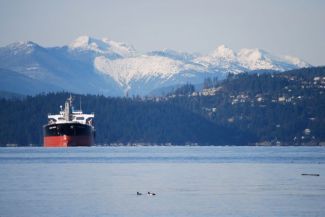 That New Years Day, instead of polar bears, I saw horses – totally random, riding along the beach.

Last year, January 1 was bitterly cold and cloudy, but the sun kept peeking through.  There were, as always, lots of people there with me… apparently I’m not the only one drawn out to the beach on New Years. Here’s what I saw that day:

This year, I returned again on New Years Day.  It was overcast, and the pond in the park behind the beach was half frozen over. 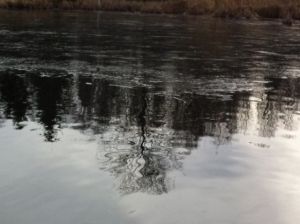 The polar bear swimmers were still doing their thing. 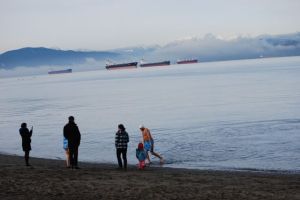 And the city looked just like it always does from this shore.. magical.

So now you know where I’ve been on New Years Day for the last five years… and where I’ll be, hopefully, for the next five.  There’s something about this ritual that I find cleansing and grounding.  I wrote a bit in my journal that day, before my fingers started to freeze, and counted my blessings.  So much to be thankful for… my good health and that of my family and friends, my amazing partner, our beautiful home, our kitten, my friends, my work… and so much more.

2 thoughts on “Back to the Beach”