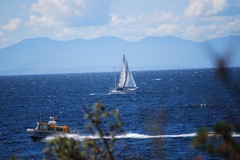 I’m busy.  It’s the first time I’ve felt busy in three months. I know it’s been that long, because it was exactly three months ago today that I declared that there would be no busi/ness in my life until August had ended.  I took the summer off, period.  I had an amazing, eye-opening, fun and fanciful season.  And then this week, just like that, September showed up.  And I got all busy.

You’d think I’d have seen it coming.  You’d think I’d have been ready for it. And maybe I did, and maybe I am.  I can do busy… what I know now, though, is that I want to keep having fun too, and even more, I want to keep feeling this new sense of peace I’ve picked up along the way.  I have to remind myself, now and then, that I can have it all.  I can be engaged in work AND have fun AND feel peaceful – it’s not always easy, but once I remind myself that it’s possible, it seems to become so.

On June 3rd, I gave myself two rules to follow for the coming three months.  Rule #1 was that my internal “Protector” got put on furlough through the end of August.  The Protector is the name I’ve given to the voice that makes sure I’m safe and secure and have what I need to get by… you might say it’s the parent that lives inside my head.  I knew I’d be okay for three months without her, so we made the deal.

Rule #2 was that I got to do whatever I felt like doing whenever I felt like doing it, as long as it didn’t involve prolonged absences from Canada (for reasons not worth listing, but let’s just say they involve two branches of the federal government).  In other words, I ordered myself to relax and have fun.

Could I have had more fun?  Maybe, yeah, but give me a break, I had me some processing to do. Did I mention that three months ago yesterday, my relationship ended? Oh, and five days before that, I unexpectedly found myself out of work?  Yeah, well, there was that.  No harm, no foul on either count, really. But I had to process, so that took up a fair bit of my time. And while it’s important and useful and sometimes even gratifying, processing stuff like grief and anger isn’t always that much fun.

Even so, I managed to get through it AND have some SUPER fun times this summer with friends, old and new, and on my own too, which was a great triumph considering how shitty I felt the first couple weeks of June.  And hey, technically the summer’s not even over yet.  But my three months are up.  And now I’m busy.

It’s a good busy, though.  In four days, I start teaching for the first time, and my mind’s been stretching in a big way.  Preparing for these classes, I feel like I’ve got seven term papers to write, one due over each of the next seven weeks.  And they’ve all got to tie together somehow.  This week I outlined the whole course and sketched out the lesson plans for the first two sessions… lots more to do, but it’s a good start.  My mind’s engaged, which is a good thing, but there’s got to be more to it than that.

Now that I’m working again, I’ve realized that fun still has to be a priority.  I’m getting better at catching myself when my jaw is clenched, and doing something about it.  If I’m at the computer (which is often where I am when I stop having fun), or if I start feeling antsy or anxious or stressed about whatever I’m doing, I might step away and do something else for a while.  I write or call a friend or take a walk or watch TV.  The other night I watched “Glee” (for only the second time – I know, I’m so out of it) and was reminded of what a fun distraction TV can be.

I don’t really want to be distracted, though, as much as I want to be present.  Present with whatever it is that I’m doing, whenever it is that I’m doing it.  That’s where the real sense of fun comes from, I’m finding.  But even more, that’s where the real sense of engagement comes from.  When I’m present, I’m engaged, and when I’m engaged in anything, no matter what, that’s where I want to be.  And when I am where I want to be, then I’m at peace.  So if I can be busy and peaceful, and maybe have a little fun now and then, that’ll do.

*I’m still not sure which language to write in, Canadian or American.  So I may switch my spellings between the two – please have patience while we work that out with our editor.

One thought on “Peacefully Busy”