Yesterday afternoon, I went to a Tweetup.  A what?  You heard me.  A Tweetup… an organized  gathering of people who use Twitter… that is, a ‘meet up’ of people who ‘tweet’ using Twitter.

I don’t tweet.  I signed up for a Twitter account last summer, for what purpose I cannot fathom at this moment, but have never really used the thing. So I was more of an observer at this event than a participant.  It was fascinating.

The purpose for this particular gathering, co-organized by Leadnow.ca and OpenMedia.ca, was to watch – and via Twitter, to voraciously comment on — the Leaders Debate.  Up here in Canada, eligible citizens (of which I am not) are voting on May 2nd for a new federal government, ’cause the most recent one, led by the Conservatives, was defeated last month on a motion of no-confidence.  (For those inclined to follow this stuff, the motion actually declared the government to be in contempt of Parliament, a first for a national government anywhere in the Commonwealth of Nations.  Kind of big stuff.)

In the view of most of my friends here (maybe all, but I haven’t asked), the Conservatives have done an abysmal job of running the country, and pretty much everyone I know is worried about seeing the Conservatives back in power.  They’re even more concerned about what would happen if this time, unlike the last several times when the Tories have come out the lead in a minority government, this election results in a Conservative majority.  So there’s a lot of activity on my Facebook page about defeating the Conservatives, and even though I’m not voting, I wanted to see what the leaders of the major parties had to say for themselves.

Facebook is really my only “social media” exposure to this election, and I thought I was seeing a fair bit of commentary on the election there.  That is, I did until yesterday, when I felt TOTALLY out of the loop. Though I know there’s a whole ‘nother universe of activity going on over on Twitter, I got to see first-hand what a hub of Tweeters hard at work (or hard at fun?) looked like.  Thanks to the wonder that is my iPhone, I can show you too. Here ya go:

The fellow whose back is in the lower right part of the picture above is one of the co-founders of Leadnow, Jamie Biggar, who spent the better part of the first hour of the debate being interviewed by the “traditional” media, explaining what the heck was going on there. 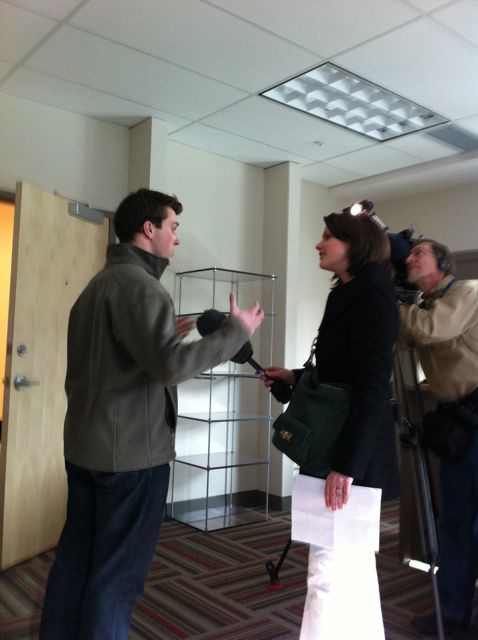 While everyone in the front part of the room was quietly listening to the debate and furiously typing at the same time (how do they DO that?), the folks in the back of the room were commenting in the old-fashioned way.

Don’t think these guys are all tweet and no play, though.  When the debate ended, everyone grabbed a free beer from the keg and joined in some real “face” time.

I managed to post one little status update on Facebook while the debate was going on, and was extremely proud of myself for that.  The funny thing is, as far behind as I feel sometimes when it comes to social networking, I’m still ahead of the curve of many of my friends.  A good reminder, I suppose… there’s always room for improvement, but we needn’t be too hard on ourselves for not being totally up to speed with the next trend in the fast-changing world of the internet.

Either way, I’m totally (as in, “totally, dude”) inspired by this next generation of leaders, and want to be part of this revolution.  Sure, I find it a bit overwhelming now, but this too shall pass.  Twitter, here I come.

Just give me a minute to find my iPhone.