I didn’t know who Jack Layton was when I moved 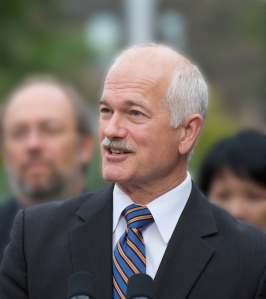 to Vancouver three and a half years ago, and I’ll bet you that if you’re one of my American friends or relatives reading this, you’ve never heard of him either.  It’s entirely possible that your local newspaper won’t mention that he died today.  If that’s the case, then read this.

Here in Canada, we’ve lost a national hero.  I was surprisingly moved, so much so that tonight, I went to my first candlelight vigil to honour the life of a real Canadian leader.  Heck, a real leader, period.

At the vigil, there was no formal program.  People just stood quietly, candles lit, and a few times broke out in spontaneous song.  “Solidarity Forever,” “We Shall Overcome,” “Oh Canada” – these are the songs that still unite us, that still remind us of our strength in times of adversity.  (Okay, maybe “Oh Canada” doesn’t do that last bit, but it was the one that everyone sang the loudest!)  A couple of Jack’s fellow party members made short speeches urging people to keep up the good fight.  People yelled “Hip, hip, hooray!” the way they still do in Canada (so cute).

There are many who will pay homage to Jack over the next days and weeks, and I will add my small voice to that chorus.  I never met him, but I know several people who did, even some who called him friend.  Jack seemed to be everyone’s friend.  Even though he was the leader of the opposition party in Canada’s Parliament, a pretty powerful post, Jack Layton came across as a regular guy – a man of the people, some would say.  As I’ve learned more about his political career, I just get the sense that he was a good guy who was in politics for all the right reasons.  I’m sure he wasn’t a saint – no one is – but he did an amazing job of giving a voice to those whose voices aren’t always heard in the halls of government.  What’s more, he inspired a whole generation of young Canadians in the last federal election, so much so that he took what had, up until then, been a minor party and turned it into a real player.  He has left a real legacy.

What struck me most about the man was his authenticity – the way he just said it like it was.  Two days ago, knowing he was going to die at any time, he wrote a letter to his party members and to all Canadians, and when it circulated this morning, I know I wasn’t the only one who cried when I read it.

Jack’s final letter contained words that he will long be remembered for.  In fact, they were spread on a large banner at the vigil tonight at the Vancouver Art Gallery.

We all knew Jack had cancer, and were amazed by his stamina through his recovery during the last election.  We also knew he’d taken a turn for the worse when, last month, he announced that the cancer was back and he was taking a hiatus to care for himself.  It seemed bad – heck, we knew it was really bad.  But everyone – and I mean, EVERY person I encountered today, online or otherwise – was shocked and stunned and saddened by this morning’s news that he had passed.

It felt very personal, and from that perspective, I feel like I understand a little more clearly what it means to be Canadian.  For here, in this small country, when a public figure dies, it IS more personal.  You might have known him or her, or know someone else who did.  Or it might just feel that way.

Rest in peace, Jack… I’m sorry you’re gone, but know that your hope lives on.

One thought on “You Don’t Know Jack”