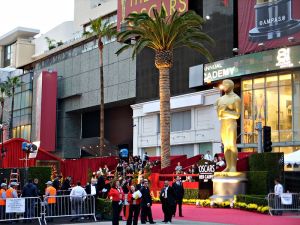 Last night, the world — and I — tuned into the 86th annual Academy Awards.  We watched “12 Years a Slave,” “Dallas Buyers Club” and “Gravity” walk away with most of the big awards. Notwithstanding the fact that I haven’t yet seen any of those films, and I thought Ellen was a bit of a disappointment, I was basically glued to my TV from about 3:30 (to get in some early Red Carpet action) until 9:00 when the broadcast ended.

If you read about my personal history with Oscar, you’ll understand that I grew up with an almost religious reverence for this event.  Even after all these years, the ritual is important to me… even if the meaning isn’t quite clear.  Was it ever clear?

I mean, there are so many serious issues going on in the world, why stop for this show?  Is watching a live broadcast of overpaid actors and actresses oohing and aahing over each other really going to help make things better?  On a big scale, no, of course not.  But then again, maybe a little bit.

Jared Leto’s acceptance speech for his Best Supporting Actor award gave me some hope that someone, somewhere, was changed by hearing a celebrity say, “To all the dreamers out there around the world watching this tonight in places like the Ukraine and Venezuela, I want to say we are here and as you struggle to… to make your dreams happen, to live the impossible… We’re thinking of you tonight.”  And then he went on to say, “…for the 36 million people who have lost the battle to AIDS and to those of you out there who have ever felt injustice because of who you are or who you love, tonight I stand here in front of the world with you and for you.”  That was pretty cool.

The Red Carpet interviews with actors also had some meaning for me. I loved learning that Lupita Nyong’o, who won for Best Supporting Actress (and who also gave a beautiful acceptance speech) had never dreamed about winning an Oscar because they didn’t watch the Oscars where she grew up in Nairobi. Now here she is, the darling of Hollywood, and while I don’t know her personally, it would appear that it hasn’t gone to her head.  She seems quite grounded, quite in her power.

Success comes from commitment, dedication and hard work.  Even Bette Midler, who’s been performing forever, said she’d been rehearsing her song for four weeks. (The Michael Jackson movie had a similar message about dedication to one’s craft, now that I think about it – he was REALLY intense, though.)

Success comes from confidence. When Lupita Nyong’o was asked how she approached her audition for the role for which was about to make her the year’s Best Supporting Actress, she talked about feeling an affinity for the character when she read the script, and walking in as if she already had the part. You know she hit it out of the park – and a star is born.

Success is often backed by strong values.  Both Matthew McConaughey and Jared Leto brought their moms to the ceremony and talked about them with much adoration and respect.  McConaughey’s mom said, “He should win.  He deserves it.”  Strong family support feels good.

Celebrity status aside, these are just people who have their own regular lives, who have histories, who came from somewhere to get to where they are.  Some of them have had lucky breaks along the way, but many of them are at the top of the game because they’re REALLY REALLY GOOD at what they do.  Real talent is hard to come by, as we all know.   It’s something to be nurtured and recognized, in ourselves and in others.  I would never want the life of a celebrity, but I do appreciate the fine work that so many of these actors – and writers and directors and cinematographers and technicians – give to us.

I guess it still boils down to this.  I love the movies.  See you next year, Oscar.